This sweet boy was actually an impulse buy on the part of Maria and myself. Buddha's breeder posted photos of two stunning boys who were still available on Facebook. I sent photos to Maria and she more or less replied "should we buy one?". Some weeks later, Maria and I drove to Germany to pick up Buddha and since then he's been living with the RidgeRules pack.

Buddha's dam Ruby is one that I've admired on several occations through the years. Maria had her eyes on Ruby already as a puppy and we couldn't be happier with how she's developed. Today she is a balanced, elegant but yet substantial girl with an easy stride. The combo of beautiful Ruby and handsome Kitoko - a boy with the most impressive front and substance - has certainly produced very nicely. On top of a sweet nature and lovely conformation, Buddha is also clear by parentage for DM, JME and EOAD. He should also not produce ridgeless.

Buddha's show carreer has suffered some setback due to two (!) toe fractures which has left him convalescent for longer periods of time. In spite of this, Buddha has a really nice wrap sheet. From 15 shows he has:

He is finished very nicely No 5 Ridgeback male in Sweden for 2019. 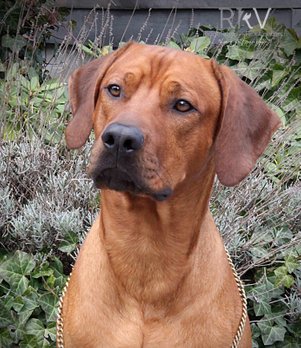